Building a legacy search engine for a legacy protocol

Translations are available in: 日本語

Most users who use the internet today, are mostly focused on three protocols, HTTP, TLS, and DNS.

While these users may not care these days how their pages are displayed to them, there was once a competing protocol to the one that we known and love that is HTTP.

Located just 10 ports down from HTTP is Gopher, on TCP port 70. A protocol that looks a lot like a much more basic HTTP/1.0.

While a basic HTTP/1.0 request may look like this:

A gopher request is even more basic:

This is great for basic file transfers, as basic bash utilities can be used to download files!

However in the end, HTTP won out over gopher and it became the protocol that most of us use to do things on the internet. The reasons why are interesting, however others have told that story much better, you can find a good write up here.

Search engines exist for HTTP, and gopher itself has support for searching in the protocol, but all the search engines for gopher are in “gopherspace”. None really existed in HTTP (that I could find).

I had a friend run a zmap scan over the internet for port 70, and then filtered the results for real gopher servers:

A sad 370 servers are left on the internet that serve gopher.

I wrote a simple RFC1436 implementation and crawler, and slowly (there are very old servers behind some of these hosts) began crawling all the menus, known as selectors, and text files I could find.

At this point I started to explore gopher space itself, and I have to say, it’s a wonderful place of just pure content, a far cry away from the modern internet where CSS and adtech are stuffed in every corner.

Given that gopher is from the 1990s, it feels only right to use search engine tech from the era. As it happens AltaVista once sold a personal/home version of their search engine for desktop computers. The issue however is that it’s win32 only software. I didn’t try running it on wine, instead I aimed for a more authentic experience of running the software: using an already fantastic guide from NeoZeed I ended up provisioning my very own Windows 98 search “server”.

I never thought I be doing this again, and yet, here we are! Join me in the adventures of "oh god we are installing windows 98 again" pic.twitter.com/Ub83PQ4sV7 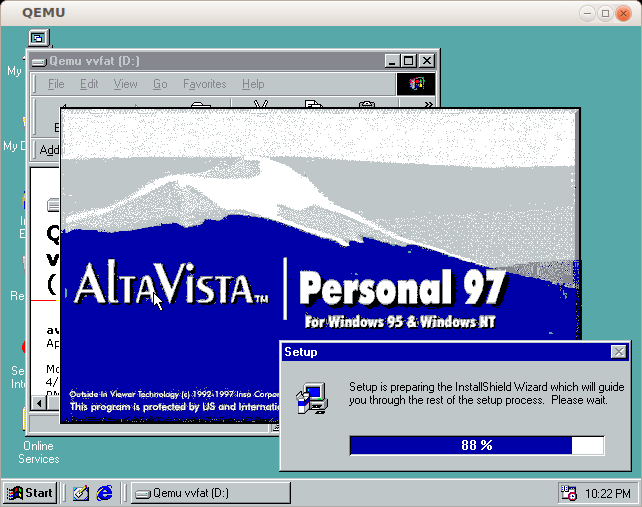 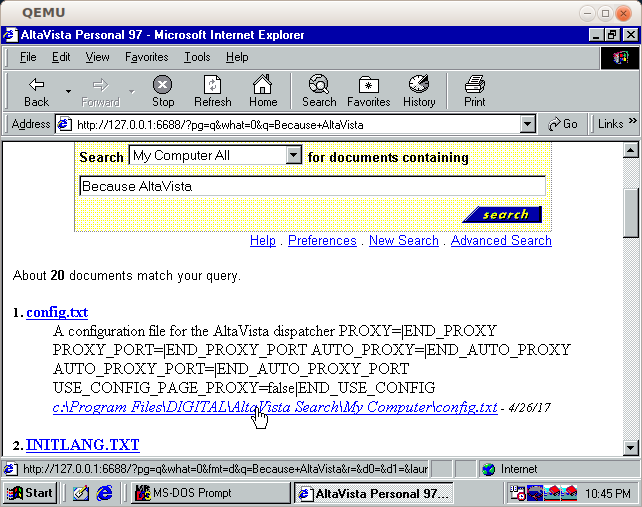 As NeoZeed found out, the search interface only listens on loopback (hardcoded), which is very annoying if you want to expose it to the wider world! To solve this stunnel was deployed to listen on * and relay connections back to the local instance, with added SSL! Using a pretty questionable (but CT logged) default SSL certificate too (A)!

Providing data to the indexer

Because the indexer and backend is a Windows 98 QEMU VM, there has to be a way of giving that VM approximately 5GB of tiny files for the AltaVista indexer to see and include in the index. For this, I chose to make a FAT32 file system every 24 hours as a snapshot of the crawled data, and then restart the crawling VM to see the new files. This worked really quite well in testing with a small amount of files, however a few issues became apparent: first of all FAT32 has file limits that need to be paid attention to. For example, FAT32 is not able to have more than 255 files in the root directory, so you have to be sure to spread out your files in folder structures.

Another issue to keep in mind is that the maximum drive size for FAT32 is 32GB (approx). This means the amount of textual content can’t go bigger than that (or we would have to spawn more virtual drives). Fortunately, the size of the crawled content is far below that so this is a non issue.

While crawling a “production size” data set, the system would reset at a random point during the indexing program running:

After tweaking the settings involving the disk caches, a slightly more constructive error was obtained: 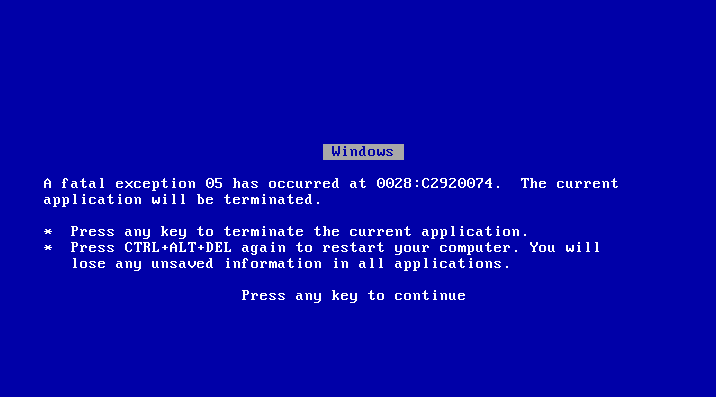 This is good! I can search for exception 05 has occurred at 0028:C2920074! Right? As it happens, there is very little information about this kind of crash on the internet (it may have existed at some point in the past, but since been removed; after all, the OS is 20 years old), however the one piece of information I could gather from searching is that it was VFAT driver related. Suspecting a bad combo between high IO load and QEMU’s INT_13 implementation, I went for the only other file system/data input system available, CD/DVD ROM!

After doing a small 500MB test (a test that FAT32 could not pass) we had a small index! 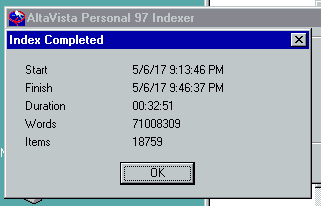 At this point we had to scale up the solution to the 300k / 4 GB of files. I discovered that Windows 98 does support DVDs, even though the UI can only display that the drive is 2GB, even if the drive is much larger than that. Despite that, all content was accessible on the drive and an initial index was (slowly) built.

The only problem with using a 20 year old indexer, is that it’s likely a very bad idea to expose directly to the internet. The other issue is that on most of the pages the interface serves references local (as in, file://) assets, meaning that a simple reverse proxy would not work.

In addition, local paths are not very useful to people searching. For this alta-sanitise was written to provide a sane front end to it, while still keeping the Windows 98 AltaVista index as it’s backend.

To do this, I produce a file system containing all the files that were downloaded, and name them by their database ID:

However in alta-sanitise, we use the database we formed using crawling, to rewrite the URL’s into something viewable:

To ensure the VM could be used for more than one project, lighttpd was put in front as a reverse proxy of alta-sanitise, and Cloudflare used for cache. This leaves the final flow looking like this: 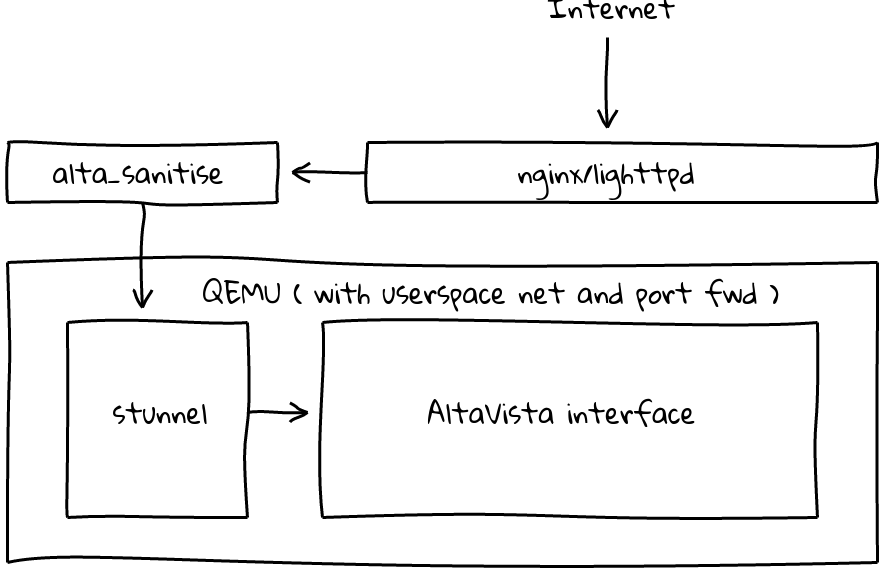 Most of my servers are monitored using collectd. Unfortunately there is no Windows 98 client for collectd (!?), so I decided to make one.

A simple Visual Basic 6 application will poll every 10 seconds and output collectd command strings over the serial port (where it can be passed on to collectd on the hypervisor): 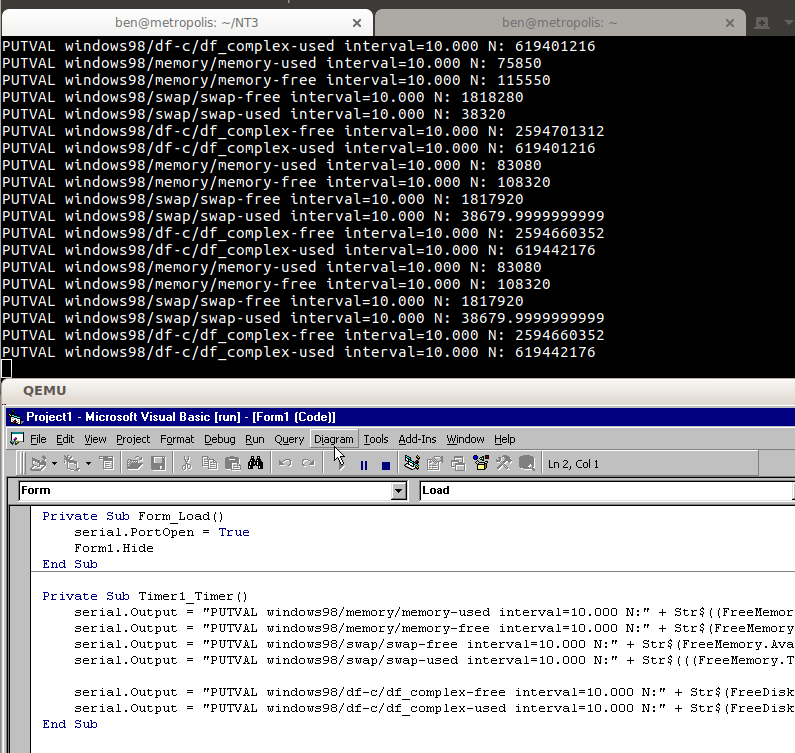 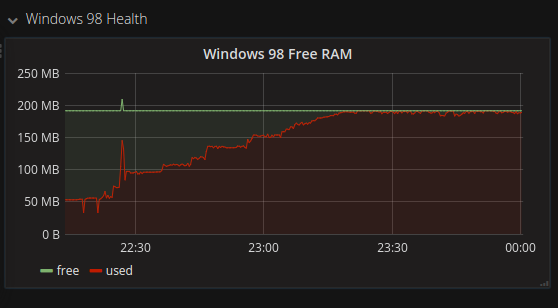 This code can be found separately at: https://github.com/benjojo/win32-collectd

(Some troubled soul may find this useful outside of a gopher crawler.)

Giving back to the community

Now that I have a sizeable index of the gopher space, I feel like I should give back to gopher space:

You can now find my blog on gopher at gopher.blog.benjojo.co.uk (** only accessible on gopher, Lynx supports gopher if that helps **).

The search engine can be used at: http://gophervista.benjojo.co.uk

And the code can be found at: https://github.com/benjojo/gophervista