Ethernet rules everything around us, a large proportion of our systems communicate to each other with ethernet somewhere in the line. And the fast pace race to the bottom for embedded systems means that almost all network equipment is smart to some degree these days.

One of the bright sides of this is that where there are smart things, there is generally Linux too. This is handy since Linux is practically eating the world and is familiar to many of us. At this point even lower end ethernet switches that used to be confined to turnkey chips are now also “smart” enough to be running Linux.

We are also in an interesting time where we have projects like the Open Compute Project that aim to make the hardware itself open between vendors. The resulting product from most Open Compute Project devices are “bare metal switches” that have the hardware to switch packets but no operating system to drive them. The operating system part for open switches (and participating non open design switches) is dealt with by a system called ONIE (Open Network Install Environment)

ONIE provides a mostly standardised boot environment that can be used to install other boot environments. From what it feels like the majority of users of ONIE use it to install Cumulus OS, a commercial debian based OS that is tuned for switches.

I went on the hunt for ONIE enabled switches, my original intention was to find cheaper ways to shift low volumes of traffic (aka, integrated VPN or out of band vpn+switch) but factors at work made me realise that that was a solution that wasn’t going to be accepted, so I took it up for fun instead. Sadly since the majority of these switches are aimed at datacenter deployments they are generally unsuitable for use on my desk. Often lacking gigabit copper ethernet ports, or even lacking anything slower than 10 gigabit full stop. On top these switches would be aggressively priced out of my budget, and have loud active cooling.

The marketing and manuals claimed this tiny 8 port switch had ONIE support. And I found a cheap vendor that sold refurbished ones for around 85 GBP. It was a done deal.

Upon first launch, we see that we have a pretty standard boring admin UI: 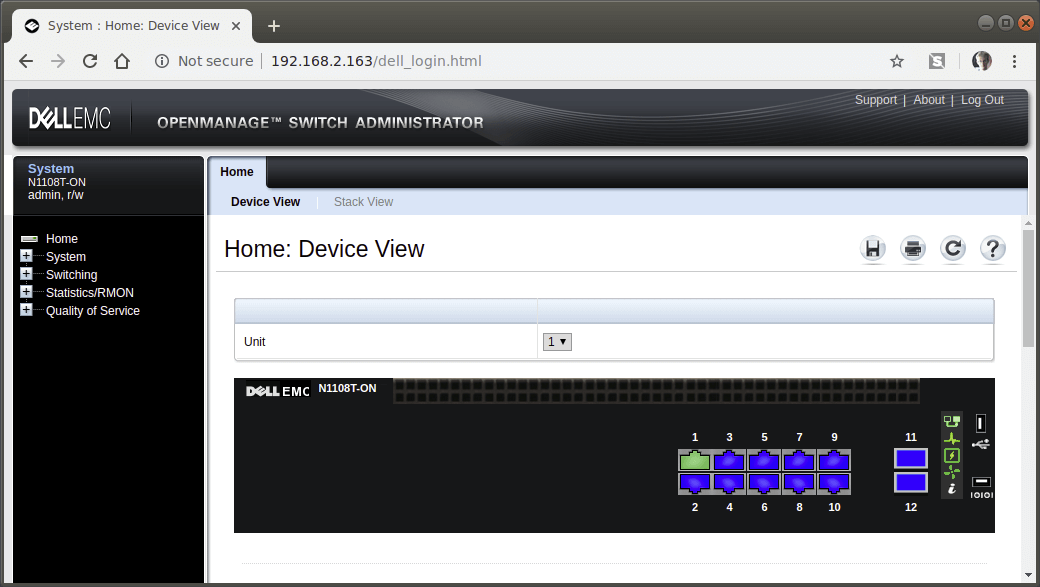 The real fun starts over the USB serial port:

Dell nicely integrated a little FTDI serial converter into the switch, this is a nice improvement from the land of Cisco style console cables that are the bane of my existence in other scenarios due to subtle vendor differences.

Anyway, over the serial console we can see

If we interact with the boot process, we can see that we can boot into ONIE Recovery mode! This is handy since the shell on the main OS only gives access to switch configuration.

With a little probing we can take a look at our surroundings:

This kernel is actually pretty new! This is a good sign for us, since embedded devices have a habit of running reasonably old kernels with limited features. The downside is that there is generally very limited support for ONIE devices running arm, and after a large amount of searching, there are no compatible ONIE images for this device at all, other than the already installed Dell OS.

So clearly we need to start hacking based on what we already have, since making ONIE images is a lot of effort and is generally locked down to those who have SDKs that are behind NDAs with Broadcom.

We can also see that we are inside a busybox system, so most of the utils are going to look like standard coreutils, but have features missing.

We can also see that the system boots directly from a MTD device with some handy symlinks prepopulated for us to look at. So it’s now a decent time to see if we can get the contents of these MTD devices out and give them a poke around:

Using binwalk we can scan over these images for clues of what lives inside them. Sadly, the mtd devices just seem to contain uboot and kernel images:

We can see based on this binwalk output that the kernel we are running in the ONIE recovery mode is newer than the one that runs the switch itself (and is built by “pchockalingam” on a OptiPlex-9020 apparently) , this is slightly saddening since that means then main OS that we need to hack is older than we originally thought, but first we have to actually get a root shell in the main OS!

The other thing we can infer from these MTD dumps is that the vast majority of the flash (900MB of it) is used as a UBI device:

So alas, we are grounded to the OS image that Dell has already installed on the device, so how do we run our own code on it?

Poking around the console outputs we can pick up a few paths to explore:

So we clearly have python installed on the device, this is likely what the device runs as it’s admin UI that we already saw.

After a quick look around the command line interface, I discovered that I also have a way to look around some part of the file system:

Poking around more, I found an applications interface:

To start with, I really just wanted to see if I can just get a shell, thus:

Using this tarball we can install it:

And to my amazement, the reverse shell attempt worked first time(!)

This is great! We are root, on a very similar system to the recovery environment, with reliable means to get a root shell!

Giving that applications are tarballs and that the python scripts provided must start with “#!/usr/bin/env python” I suspected that the system was just launching them straight up rather than involving a python parser. So assuming we could produce binaries that compiled to arm and had the correct dependencies linked into the binary (aka static linking) then we could avoid Python all together.

As it happens this is really easy in Go:

Then on the switch:

It works! This is big news since there is a large community behind Go libraries, and since the binaries that go produces are automatically statically linked (as long as you don’t import C dependencies), we can easily develop against the switch without worrying that we are going to bump into lack of dependency issues on the switch’s operating system.

The first thing it called for is a SSH server that dumped you into a shell automatically:

Sadly I could not get ptty’s working, meaning that for now the example just spawns a shell in interactive mode, better than running a reverse shell every time you want to get root access to the switch though!

Giving the low cost of this device, and the fact it runs a freely rootable OS, it would make a nice out of band switch with a VPN uplink. However for this we need to check if the kernel that we are stuck on can support TUN/TAP devices, luckily this is easy since the kernel itself was compiled with CONFIG_IKCONFIG_PROC=y meaning that the whole kernel config is in /proc/config.gz making it easy to check what the kernel supports:

This is great, this means we can create TUN/TAP devices on this system, We can use this feature to bring up wireguard tunnels to provide safe and encrypted access to the device. Wireguard for Linux is a kernel module, however with some small patching you can also use the wireguard-go implementation for devices where you can’t load modules.

Giving wireguard-go really does not want to load on Linux. You need to pass it some encouragement in the form of an environment variable, after that we can confirm that the new “test” interface is running. At this point wireguard-go is running in the background, and is waiting for configuration.

At this point we need to compile the CLI tools for wireguard called “wg”, this is a C program that is designed to work for both the Linux kernel module and the tun/tap server variant. However for it to be easily compilable for this target, I stripped out the support for the module for compilation simplicity, and got to work cross compiling to arm:

Once it’s on the switch, we can use the tool to set up a config, and standard system tools to give the interface an IP address.

And as you can see, we have turned this cheap 8 port switch into a wireguard capable device. This setup is easy to automate using the previously mentioned applications interface.

Under the hood pics 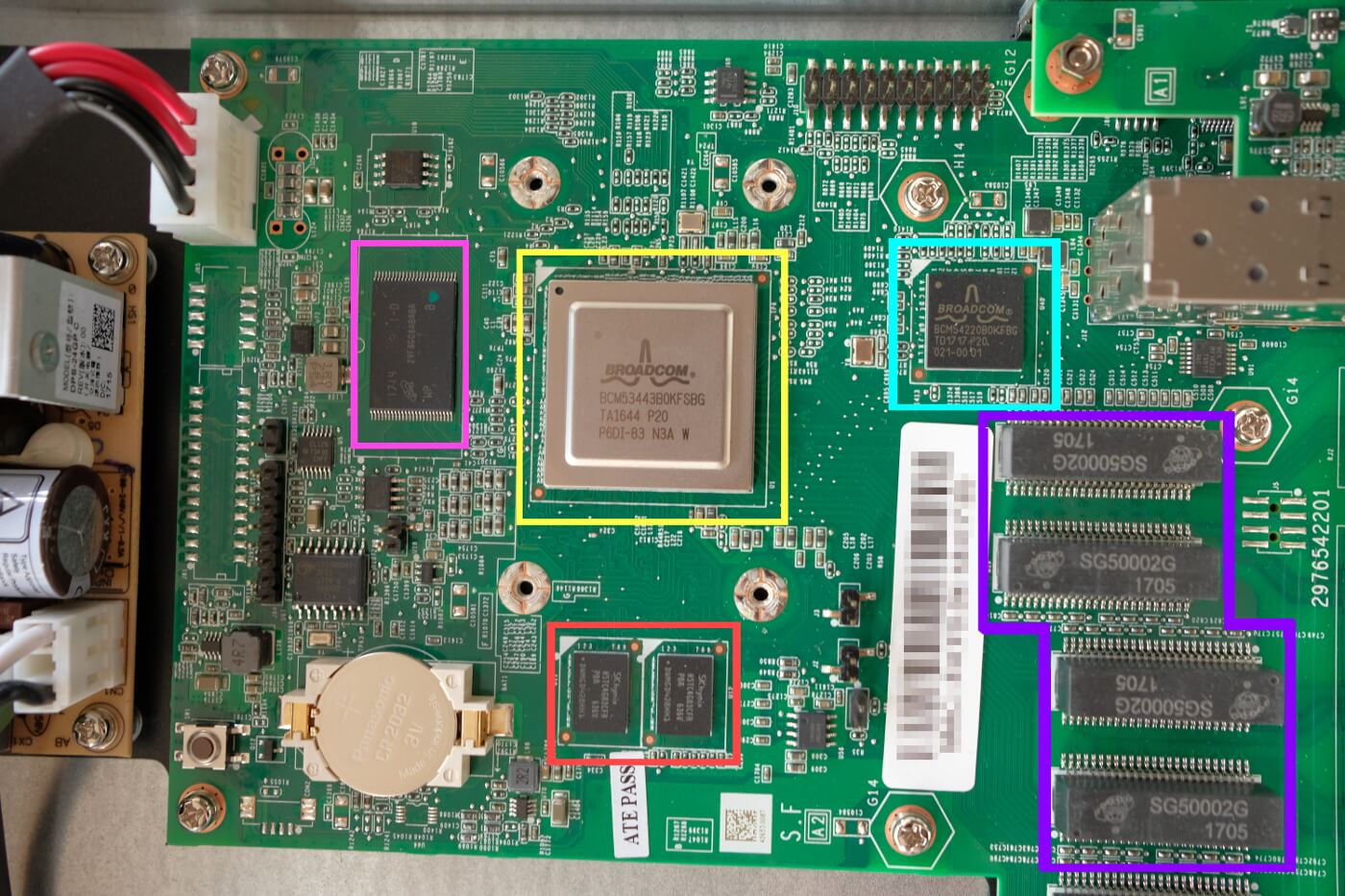 Power consumption on this device is great with the power supply being rated for 25W, but the actual nominal consumption being just 5W.

The future is very interesting! With these kinds of devices becoming more and more common thanks to the cost improvements with adding smart control planes, I suspect we will soon see a lot of low/mid tier routers just disappear into switches. This has already somewhat happened, but with chipsets like BCM53443B0KFSBG existing, there isn’t much reason left to not just make smart switches that also route (keep an eye out for devices that are running fastpath, they are likely smarter than you think they are!).

If you are interested in seeing some of the utils yourself (they are not really that special) then you can find the github repo where I dumped a bunch of working directories here: https://github.com/benjojo/dell-N1100-tricks

I hope to end up doing some more hardware posts in the coming months when I find the time, if that is your kind of thing then you can stay up to date with this blog by following me on twitter or using the blog’s RSS feed