Payments with less of the evil

Visa and MasterCard are a pair of companies that I feel definitely make the world a worse place to live in, due to the fact that they sit in front of a critical part of how modern society works. Money.

This isn’t going to be a post about how Bitcoin or a $blockchain company is going to fix anything. Ultimately I think blockchain payments are impractical, are a huge transport for fraud, and end up burning a bunch of power in the namesake of hippy internet money. It does not help that generally they also have a pretty terrible fanatical user base too.

Card networks are generally not great because they end up being moderators for content that passes through their network. Examples of communities focused around consensual acts being banned from card networks are not unheard of and a lot of “non wholesome” in the eyes of the card processors ends up being treated this way too, including some activisim movements. The thing is, I fundamentally believe that these card networks should have zero say in what is passing through their network, it just frankly should not be any of their concern.

In some parts of the world you are stuck with card networks for rapid payments that work with online systems. However Europe has standardised ways of paying each other near instantly across banks without any fee. In the UK you can use the domestic system called Faster Payments, inter EU you can use SEPA.

These systems work by sending a message through a private network, then doing settlement on the bank side at a later time.

To summarise. A message is sent to the other bank, that a transfer is on it’s way. Assuming that other side accepts it, the banks trust that both sides will settle through a Bank of England account at a later time.

Giving these payments are instant from the consumer point of view, why not make this into a payment system? (

note, there are likely many reasons not to turn this into a payment system. For one I don’t know if this is strictly legal either in terms or service or other regulatory ways

The workflow is made much easier because one of the banks I use called Monzo in the UK has pretty awesome API documentation, and allow you to setup webhooks for payments. 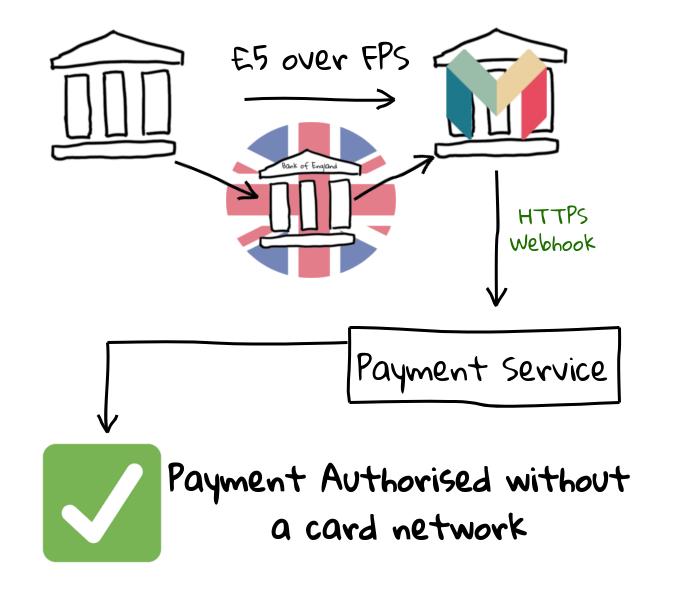 I cooked up a small tech demo using the Monzo Webhooks system:

Coming to a jurisdiction near you?

Good news, It looks like card networks might be getting cut out of some of their market in the EU with PSD2, a EU regulation that will allow payments to easily come through bank accounts in a open way.

and thank god too.