You cannot cURL under pressure

cURL. The wonderful HTTP plumbing tool that powers both a lot of command line debugging and bash scripts, but also exists as a strong foundation in our applications in the form of libcurl.

The scale of adoption of libcurl / curl is actually remarkable. It’s mostly kept up to date with new protocols too, ensuring that it’s relevance is maintained. Putting it bluntly, there is not really a better tool in the unix(-like) land for making HTTP/HTTPS requests than cURL. (For windows I guess it’s 50/50 with WinHTTP and for OSX it’s URLSession.)

But the scope creep of cURL is also something to behold, the program can do tonns of stuff! Just look at the home page!

Holy shit! That’s a lot of RFC’s that have been implemented. The help pages of a fully loaded cURL install are, understandably, very long:

With cURL having this many features (with the general mass of them being totally unknown to me, let alone how you use them) got me thinking… What if you could do a game show style challenge for them?

This brought back memories of the game that the now defunct UsVsTh3m made called “You can’t javascript under pressure”.

Sadly UsVsTh3m’s content is gone, but the Internet Archive holds a functioning copy of it:

I thought… Could you could turn the curl manual page into a game?

Well no need to just think about it anymore. I present to you: 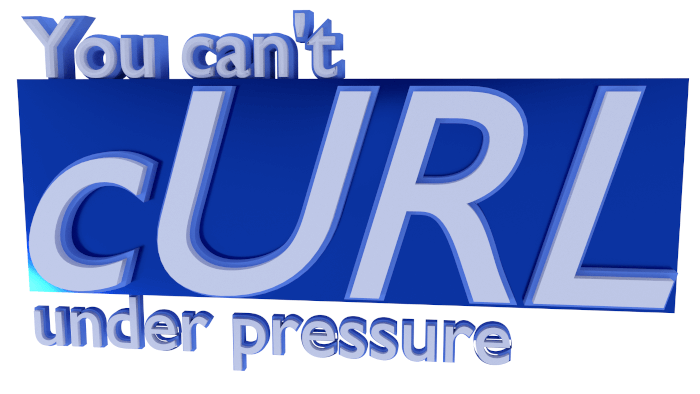 Below is a technical write up of the infrastructure behind this game, if you are stopping here then feel free to keep track of my future shenanigans using my blog’s RSS or following me on Twitter.

The game itself is actually quite basic, it boils down to this flow diagram:

To prevent users from tripping over themselves (or eachother) and making their environment dirty, every time a user completes a challenge they are switched to a new VM: 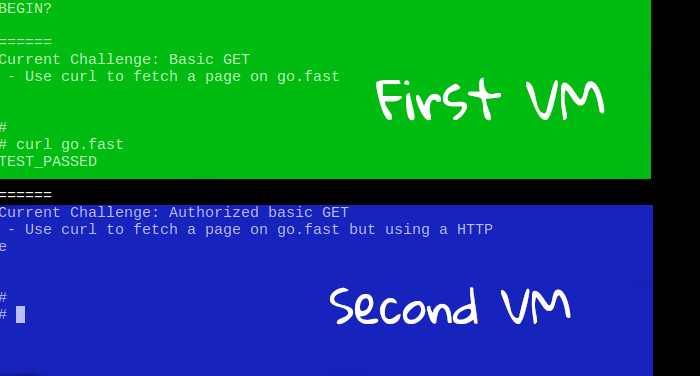 The way this works internally is a single vm-router takes in the main websocket connection, and holds the game state with the client. It then talks to a number of copies of a test-supervisor.

test-supervisor holds a number of booted VM’s in order to quickly serve demand. When a challenge is over, the VM that was being used for that user is killed along with the filesystem and a new VM is booted in its place to prevent cross contamination.

I’ve had a nasty habit in the past of making blog posts that had interactive elements that the feature backends can’t keep up (even though the blog’s 100% cache hit rate keeps going).

The most recent case of this is when I wrote about a QEMU vulnerability in my own site and the incoming visitors rushing to try out that site had me asking friends for compute capacity in a hurry to keep up with demand.

Since this game requires cycling over a lot of VMs, the ‘slashdot effect’ could really be lethal for this post. So I’ve spent time this round to help things run smoothly.

One of the big bottlenecks is booting VMs. I spent a considerable amount of time tweaking both the qemu parameters and linux kernel config to try and cut down on any drivers or anything else slowing down the state of getting a system booted and into a shell.

I ended up taking dmesg dumps and moving them into spreadsheets to highlight stages that were taking a long time. 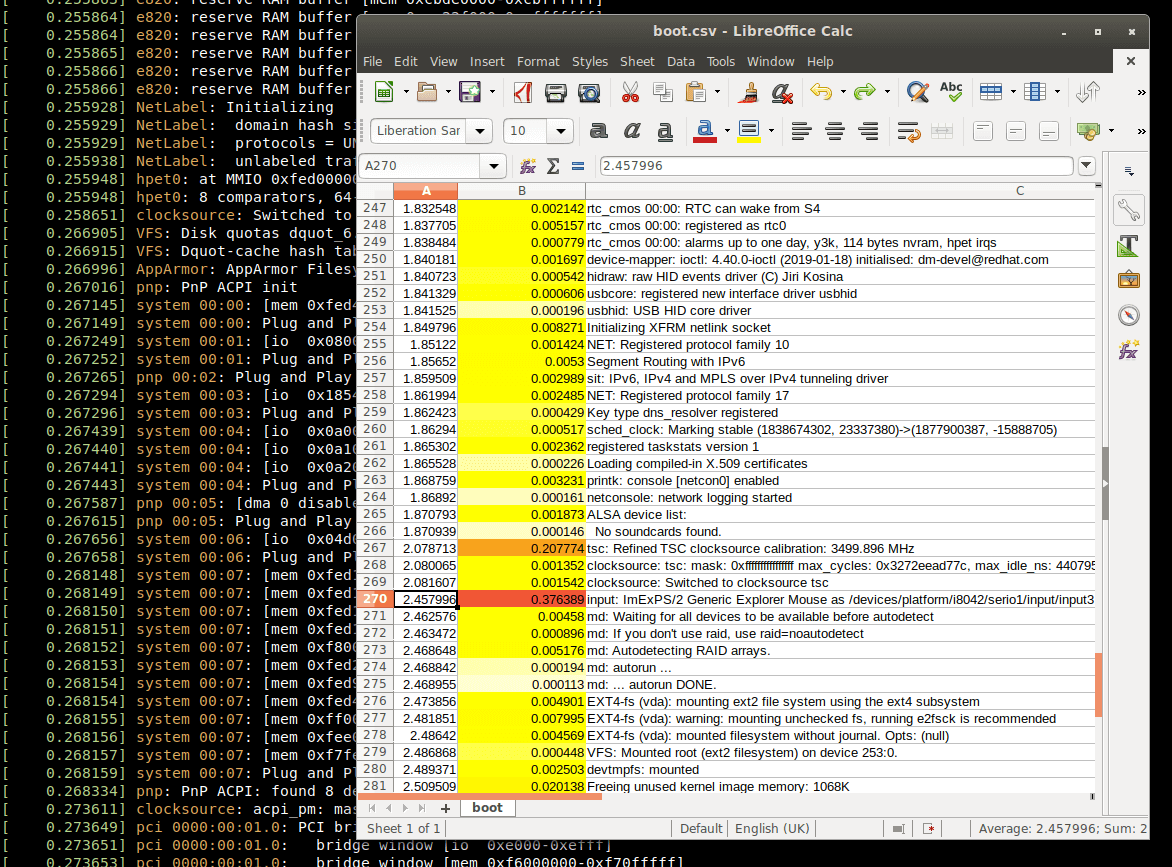 The changes I ended up doing was:

I found Feng Tang’s talk slides from Linux Plumbers Conference enlightening on getting the boot time down.

The 2.3 second boot time was without KVM acceleration. I didn’t want to enable KVM since I was nervous about giving access to that to possibly random users on the internet. With KVM acceleration boot to a usable shell was roughly 600 milliseconds.

Giving I had built all of this up with buildroot I ended up with a nice small rootfs and kernel image at the end of it.

Since these small VMs fundamentally need network access to work correctly, some creativity was needed to ensure that things could remain both secure (so that other players can’t sabotage other players) and easy to manage (I need to be able to attribute connections to individual VMs)

While most of the solution for VMs is TUN/TAP devices attached to a bridge, that would require giving the qemu processes root for a short amount of time, something I didn’t really want to do in the case that the qemu layer was breached.

The iptables rules to do this are pretty simple, and I’ve used this kind of setup before on my Giving every Tor Hidden Service an IPv6 address post.

You can then use the /proc/<pid>/fd to track down the connection owners to a single VM process. Using that we can check what challenge they are suppose to be doing and route them over to the correct testing logic.

This logic can get a little ugly with FTP, a protocol that deals with multiple connections (one control socket and another data socket).

Since this system would easily get overwhelmed, the vm-router has the ability to spawn more systems in the case of dire need. This works with a little homemade PDU controlled + DHCP/PXE Boot cluster I made a while back, but then had no use for: 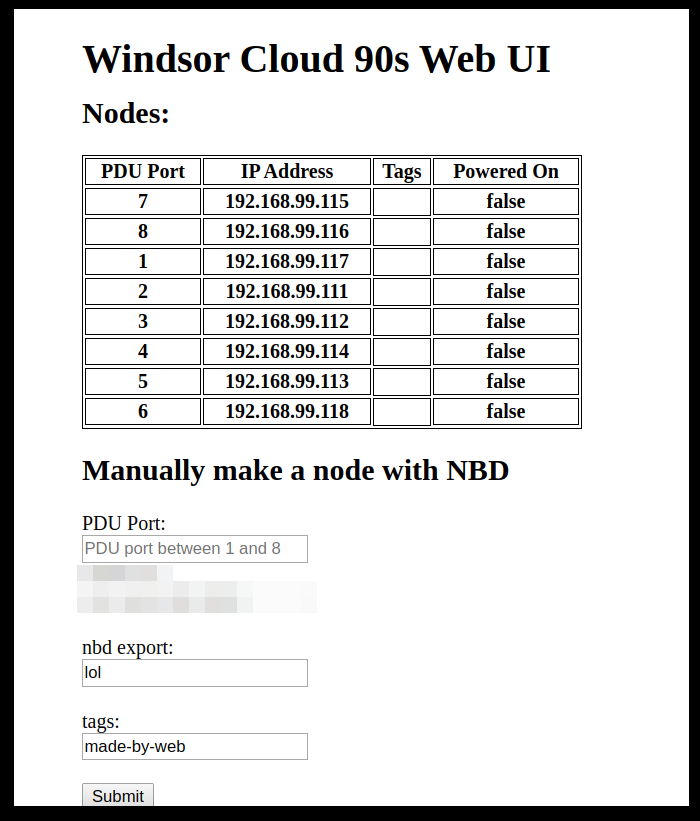 Small brick sized PCs are started and shut down automatically to meet demand should there be a traffic surge.

Like most of my blog posts, you can find the code that powers the backend on my github:

If you enjoyed this, you may enjoy the rest of the blog, You can keep up to date with both the serious and non-serious stuff I do by using the RSS feed or by following me on twitter

robots.txt usage over the Alexa million (2015)