DNSFS. Store your files in others DNS resolver caches

A while ago I did a blog post about how long DNS resolvers hold results in cache for, using RIPE Atlas probes testing against their default resolvers (in a lot of cases, the DNS cache on their modem/router).

That showed that some resolvers will hold DNS cache entries for a whole week if asked to (https://blog.benjojo.co.uk/post/dns-resolvers-ttl-lasts-over-one-week), and I joked at the end that one could use this for file storage.

Well, I could not stop thinking about doing this. There are surely a lot of open DNS resolvers out on the internet, that are just asking to be used for storing random things in them. Think of it. Possibly tens of gigabytes of cache space that could be used!

This is not the first time something like this has been done, Erik Ekman made PingFS, a file system that stores data in the internet itself .

This works because inside every ping packet is a section of data that must be sent back to the system that sent the ping, called the data payload:

Because you can put up to 1400-ish bytes in this payload, and pings take time to come back, you can use the speed of light in fiber as actual storage.

Now obviously this is not a great idea for long term data storage, since you have to keep transmitting and receiving the same packets over and over again, plus the internet gives no promise that the packet won’t be dropped at any time, and if that happens then the data is lost.

However. DNS has caches. It has caches everywhere.

This means that the DNSFS looks a lot of the same as PingFS, but once a query is sent it should be cached in the resolver, meaning you don’t have to keep sending packets to keep the data alive!

For this to work we need a lot of open DNS resolvers. Technically DNS resolvers (except the official ones that a ISP gives out) should be firewalled off from the public internet because they are a DDoS reflection risk , but a lot of devices out there ship with bad default configuration that allows their built in DNS resolvers to be reachable from outside the LAN.

The more open DNS resolvers there are, the more redundancy (or storage space) we have.

For this, we need to scan the whole internet for resolvers. This is a slightly daunting task, however when you take into account the ranges on the internet that are not routable and ranges of those who do not want to be scanned , it amounts to about 3,969,658,877 IP addresses.

In addition to that we are looking for open resolvers, this means that the DNS server on the other end must be able to look up public domain names, most DNS servers are setup to be authoritative for a single domain name, and can’t be used by us for file storage.

For this, I am using Robert Graham’s masscan to send DNS queries to all applicable IP addresses on the internet.

However this command has a problem, I am looking for open resolvers, not just things that will reply to port 53 on UDP.

My solution is to use a great feature of the linux kernel called BPF filters (you can read a great article about BPF filters and their use to filter traffic on the Cloudflare blog). You can use them with iptables to drop any traffic you don’t want, but programmatically! One BPF rule can do a whole chain worth of work.

I managed to write a tcpdump filter that only matched the DNS responses that I wanted (ones with a single results inside them).

I then compiled it to a raw BPF rule using a small helper program:

and then inserted it into IPTables:

Now masscan will only see and then log results I am interested in. No need to do a 2nd pass to qualify servers.

After waiting about 24 hours for the scan to complete I got only two abuse notices! One was automated and very formal, the other not so much:

I think this guy misunderstands that a NOC abuse contact isn't for sending that kind of abuse to pic.twitter.com/t0ZIbgKyai

At the end I was left with 3,878,086 open DNS resolvers, from all ranges and places in the world. Visualised nicely from Cloudflare’s DNS traffic analytics: 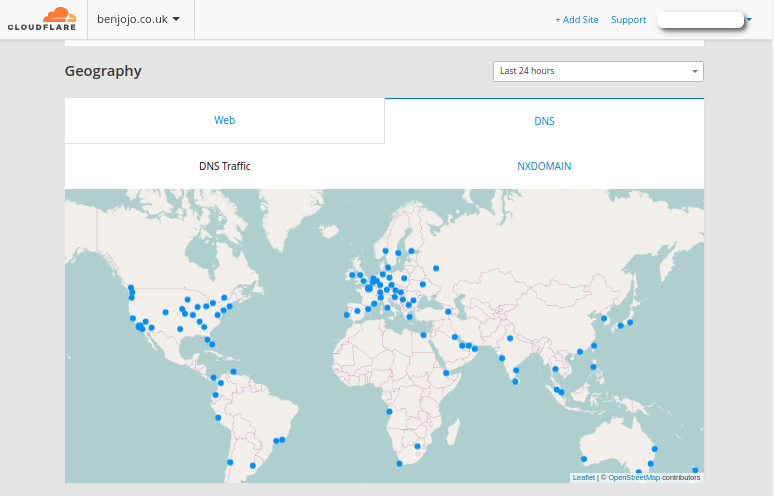 Basically, where there are Cloudflare data centers, there are open DNS resolvers.

The country breakdown for open resolvers is as follows:

However, this data is kind of meaningless. Because all it is really showing is the biggest ISP and countries. So let’s try looking at the open resolvers per internet user in a country:

Or, if we strip the countries with less than 1 million internet users:

How long do resolvers hold cache for?

Before testing this, I waited 10 days to allow for all of the resolvers who could be on dynamic IP addresses to change and become unusable. This waiting lost me 37.9% of my IP list.

RIPE Atlas did a decent amount of work to show that a non dismissable percentage of Atlas probes (normally on residential connections) change the public IP address once a day: 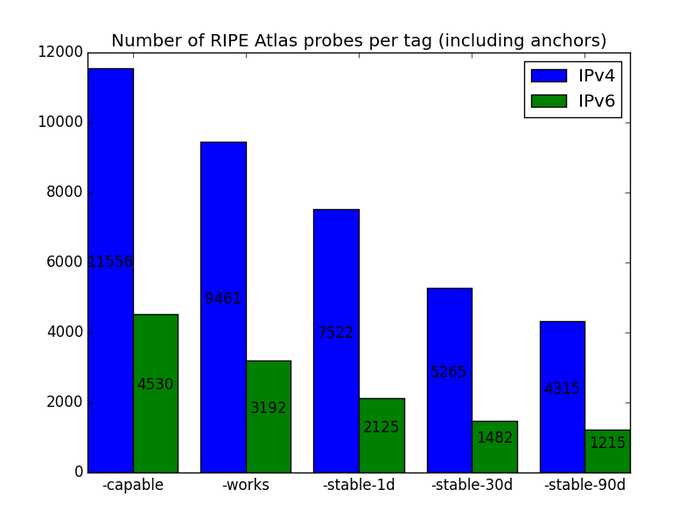 After that, I replicated the old method, a very long TTL (in this case, 68 years) and a TXT record containing the current unix timestamp of the DNS server.

The initial query rate on my DNS server was interesting, showing a large initial “rush”, likely due to some DNS resolvers having multiple levels of caches (and thus those upper caches warming up) 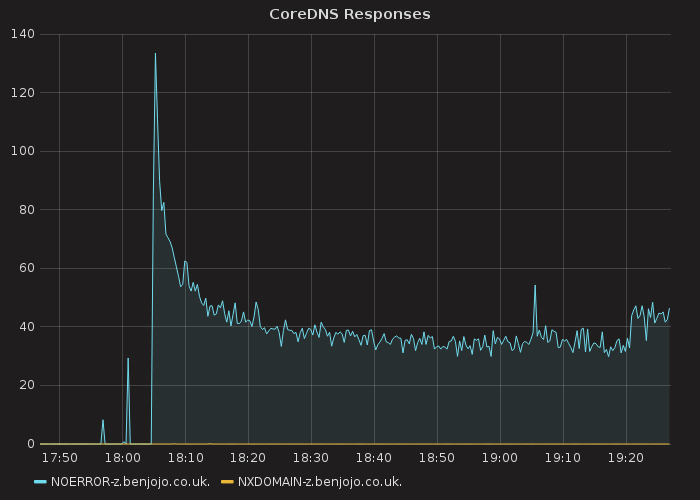 Then refactored some code on the RIPE atlas post to work with my dataset. This showed that 18% of resolvers can hold items in cache for about a day:

The next task is to make a basic guess on how big the cache is in these 400k open resolvers. To assist in this guesswork, I queried version.bind on every one of these resolvers, filtered down to the major brands of DNS server, and ended up with the following: 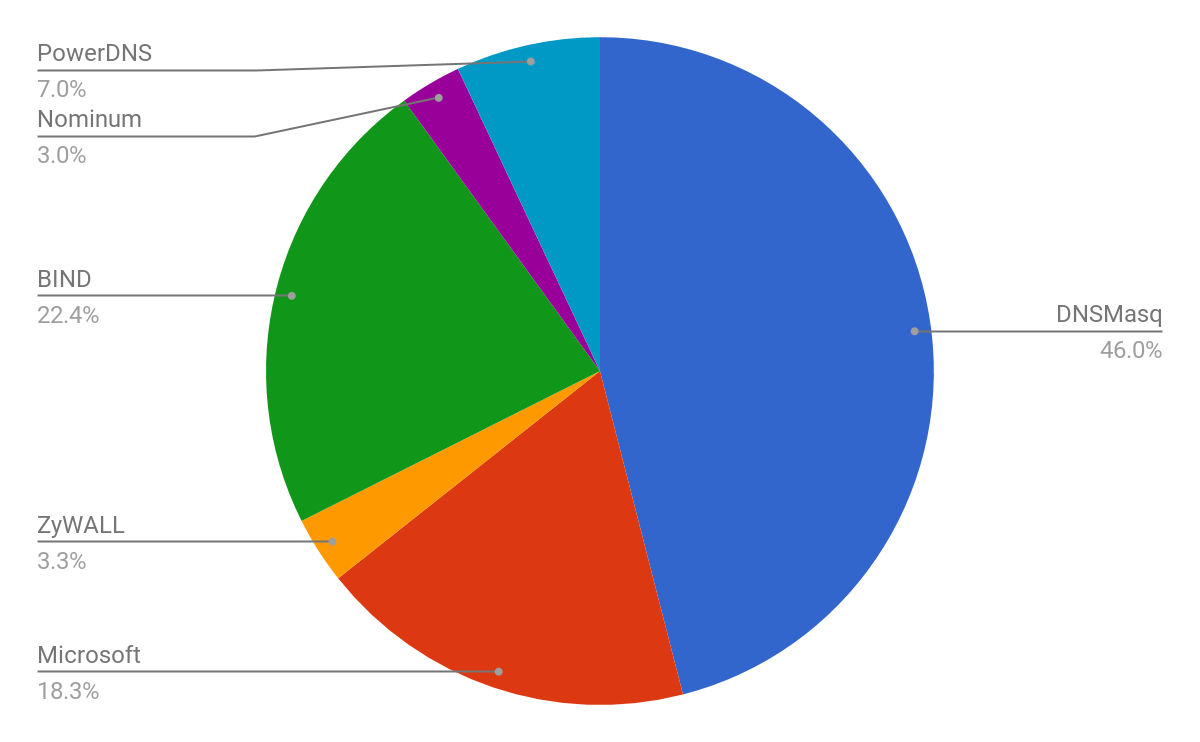 The default cache configurations for these devices are as follows:

At this point I figured a maximum of 9 TXT records, each 250 character base64 string long (187 bytes ish) would be reasonable.

As much as I like FUSE I found that due to modern assumptions of desktop linux it’s impractical to use it for high latency backends, which DNSFS would be since its data rate is very low (but still faster than a floppy disk!). So I chose a simple HTTP interface to upload and fetch files to and from the internet.

The DNSFS code is a relatively simple system, every file uploaded is split into 180 byte chunks, and those chunks are “set” inside caches by querying the DNSFS node via the public resolver for a TXT record. After a few seconds the data is removed from DNSFS memory and the data is no longer on the client computer.

To spread the storage load, the request filename and chunk number is hashed, then modulated over the resolver list to ensure fair (ish) spread.

For the demo, I will store one of my previous blog posts in the internet itself!

As you can see, my file has made quite a name for itself.

As always, you can find the code to my madness on my github here: https://github.com/benjojo/dnsfs

Building a legacy search engine for a legacy protocol (2017)