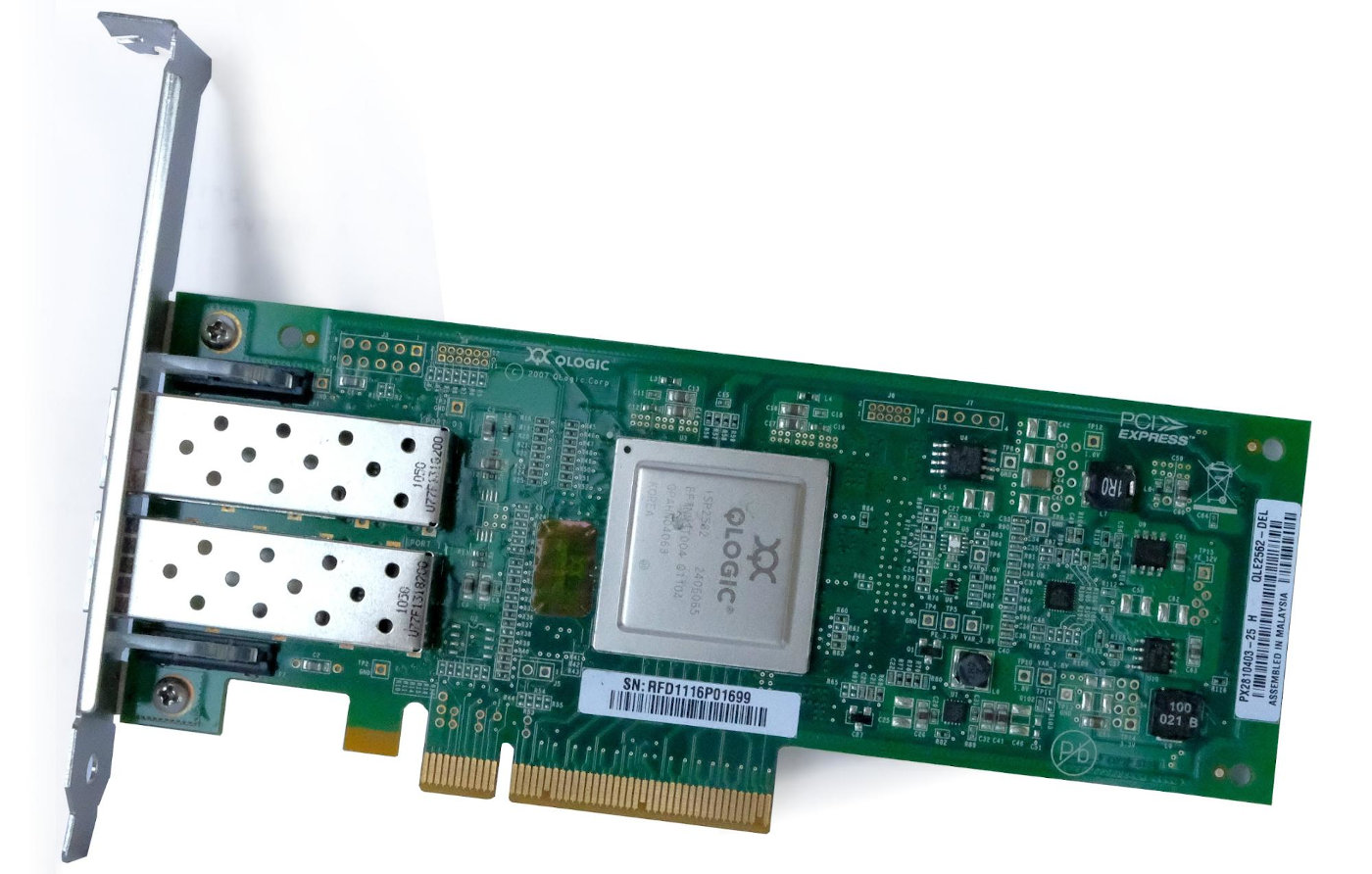 This story, like another in the past, started as an eBay purchase that I would soon regret. I was scrolling through my favorite eBay supplier when I found a listing titled Job Lot Of Roughly 350 Various Network Cards. This of course piqued my interest. Some close photo inspection identified a whole load of cards in the pile that were worth the price of the whole lot. So I naturally bought it.

What I had not mentally planned for was that “Roughly 350” is a lot of anything. This soon became apparent however due to a pallet truck turning up at my flat in London.

After dealing with the slightly embarrassing logistical challenge of getting a pallet up into my flat itself, I began to sort the cards in to their types, and found myself with a lot of two types, 4x 1G Intel i20 cards, and a lot of 8G Fibre Channel cards from QLogic (now Marvell) and Emulex (Now Broadcom). I had an unreasonable amount of these Fibre Channel PCIe cards.

Fibre Channel (FC) is used for connecting systems to remote storage efficiently over a fabric different to the common ethernet network. To make it slightly confusing, to the untrained eye they could be confused with 10G ethernet since both take SFP+ optical modules.

After doing some research, it does appear that buried in the history of FC, there was support for carrying IP traffic over FC presumably so that systems could be connected with only FC.

Surely there is a way to get some use out of these cards? Since I had so many of them, I figured it would not hurt to try and bring new life into them.

So I grabbed two test machines, installed a single port QLogic card into both of them, and connected them up with some OM3 cable. 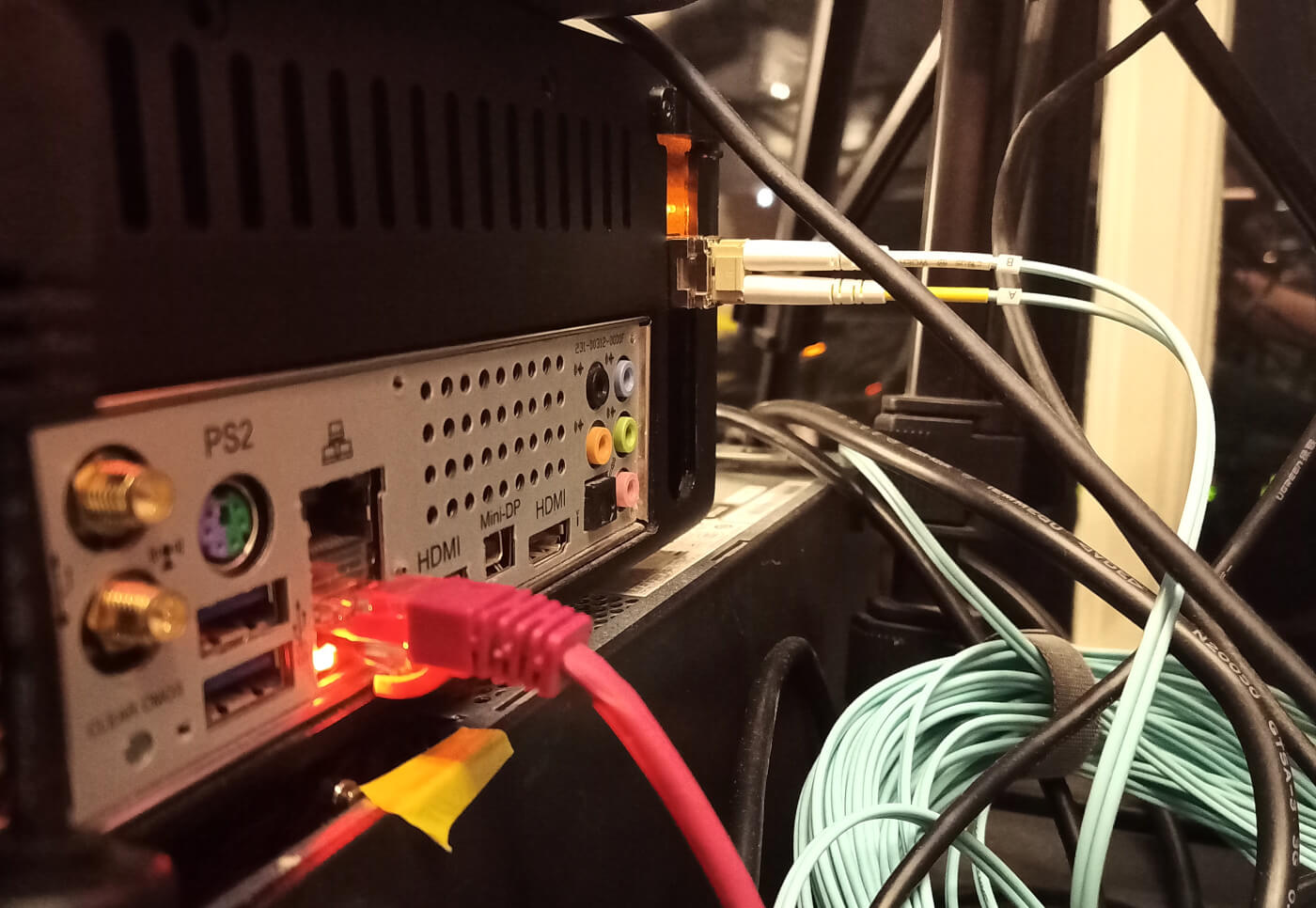 FC Host Bus Adapters (HBA) by default are looking for a target (typically a Storage Area Network (SAN)) to establish a session with. So while connecting two machines together will bring a link up, they will not be able to do anything with each other by default.

For this one side needs to be in target mode and provide storage. For this reason the SCST project has a driver for the QLogic series of FC cards that can make them act as a storage over FC target.

After compiling this module and getting it working, I looked into how to use SCST and found, to my delight, that there is a user space module. That module allows the creation of devices entirely in userspace, which can then be exposed to another system over FC.

This is great because it allows me to create a virtual device using a just systems programming techniques. The downside is that, while there is documentation for this, the amount of examples of code that uses this in the wild is effectively one, and it’s the fileio example included in the SCST codebase. This code example, however, would prove invaluable as it’s high speed (can read up to 6gbps), and is clean enough to be used as a reference.

As I got deeper into proof of concepts I realised I could not simply send arbitrary packets back and forth over FC, meaning I would have to implement a SCSI compliant device for the purpose of getting network traffic back and forth.

Regardless, I got cracking on with it and decided to see if I could write a virtual device handler in Go. What I was not expecting was that this means you have to basically write a device nearly from the ground up. This meant I would have to get familiar with the protocol that disk drives speak: SCSI. The slightly annoying bit is that being a disk is actually surprisingly complex. I now understand why bugs in drive firmware exist, since the manuals that give a medium view into the SCSI command set are over 500 pages long.

One of the most fundamental SCSI commands that exists is INQUIRY, it describes the model and type of device attached. It’s also one of (apart from the SCSI version of a ping) the first commands linux will send to a SCSI device, and it will make classification decisions based on the output of the INQUIRY.

You can see the output of this early stage command by looking into your dmesg, and looking for something that looks like:

These are the results of the kernel issuing the INQUIRY command, and outputting what class type your device responded back with (In the above case a “Direct-access block device”). The device type provided will determine how the kernel handles you. Picking a block storage device type will result in the kernel automatically sending various information gathering SCSI commands that can be quite hard to implement correctly. Thankfully there are a range of other devices you can pick from.

After some playing around, I found that identifying as a scanner resulted in the fewest questions being asked by the linux kernel. Just one or two INQUIRY’s and then a device would be made under /dev/sg<n> for your use.

This resulted in a slightly amusing dmesg of:

Now that we have a minimal virtual SCSI device, we can get to work on getting it to move ethernet packets for us. Even if smartctl had some issues parsing it, it was “close enough”.

So I decided to build a basic interface that accepts SCSI writes as outbound packets, and allows the client to poll for incoming packets. Like in a previous project, I used TUN/TAP to make a virtual network card on both systems.

On the FC Client, we can use the generic SCSI interface in linux (sg) to manually fire READ and WRITE commands.

This leaves us with a basic polling mode that results in basic connectivity:

But since it was polling the fake drive, it had high latency, and abysmally low throughput (less than 80kbits/s). We can quickly improve this by reducing the polling interval from the testing 100ms to 1ms.

This gave us a much better latency and throughput, we were nearly at 10mbit/s with just this.

However we are now at the limit for how fast we can reasonably poll for new packets. Now we need to ideally push packets to the other side when they are available. The easy way to do this is to hang a SCSI read request for a bit until there is a packet. However, due to the way SCST’s user space mode works ( only a single request can be processed at once ) we will have to find a smart way to somehow serve a long standing SCSI read while still being able to process writes… So I did the easy thing, and just made two SCSI devices.

This allows us to get low latency with full duplex communications:

With a throughput of around 100mbits:

At this point, while we have not reached anywhere near the technical limit of 6gbps, we have basically reached “good enough as an out of band network” levels of function. I sadly don’t have a FC switch to test if this can go over a fabric, but I don’t see any reason why it should not. But in a slightly more creative setup someone could use such a thing as a backup IP network for when systems go totally unreachable.

I suspect with some effort you could get this to be faster, however for me it’s personally not worth it. Much like the attempted IPoFC backport it might be impractical to get the throughput to be better than gigabit ethernet while also not consuming large amounts of CPU in the process, so the value of such a project is minimal. It’s also worth pointing out that I did look into modifying the qla2xx driver itself, but without decent documentation of the qlogic chipsets themselves it seemed to be reasonably difficult to modify it directly to be an ethernet card.

However, I did manage to make several performance jumps during the project with basic stuff like ensuring not to emit debug messages on the hot path, and slightly more obscure issues that I later on found involving the performance impacts of Go channels. I’m sure you could obtain faster links by chaining together many SCSI devices together, and then using the multi queue TUN/TAP feature to avoid blocking on a single TUN/TAP file descriptor.

The final full system flamegraph looked like this (click for interactive) half of CPU was used for jumbo frames 400mbit/s: 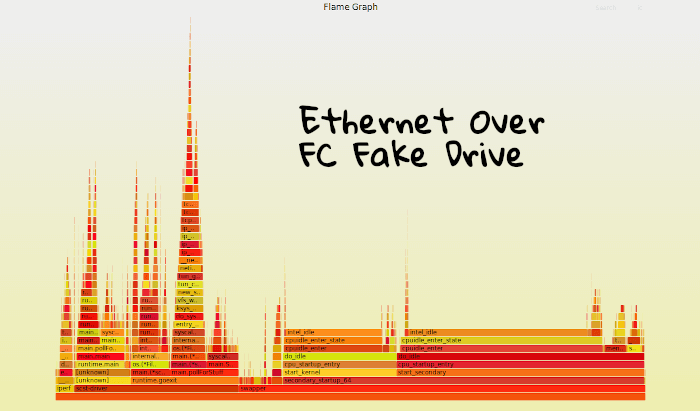 While the same systems with Intel X520 10 gigabit ethernet cards look like this (click for interactive) (CPU load was only a single core for a 10G flow):

Overall; not great, not terrible.

You can find this rough code over on my github, but it’s really best to be used as a data point for SCST’s user space module, since I cannot in good faith recommend people write virtual SCSI devices in a language like Go.

If you wish to see the internals, you can find them on my github: https://github.com/benjojo/IPoverFC

Since I mentioned at the start that I have a lot of these cards, if anyone is in the London area and is willing to take some of these off my hands, I will happily depart with them. I have roughly 2 tesco bags of Emulex FC 8Gbit cards and 1 tesco bag of QLogic. If that’s your thing feel free to email over at fccards@benjojo.co.uk!

If this was interesting to you, you may find other bits you like on the rest of the blog. If you want to stay up to date with my ramblings or projects you can use my blog’s RSS Feed or you can follow me on twitter.